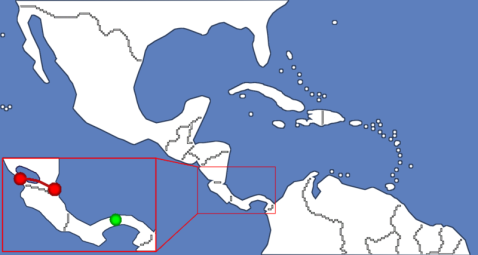 In 1909, the United States provided political support to conservative-led forces rebelling against President Zelaya. U.S. motives included differences over the proposed Nicaragua Canal, Nicaragua’s potential as a destabilizing influence in the region, and Zelaya’s attempts to regulate foreign access to Nicaraguan natural resources. On November 18, 1909, U.S. warships were sent to the area after 500 revolutionaries (including two Americans) were executed by order of Zelaya.

Officers of Zelaya’s government executed some captured rebels; two US mercenaries were among them, and the U.S. government declared their execution grounds for a diplomatic break between the countries which later lead to formal intervention.

At the start of December, United States Marines landed in Nicaragua’s Bluefields port, supposedly to create a neutral zone to protect foreign lives and property but which also acted as an invincible base of operations for the anti-Zelayan rebels.

U.S. Marines occupied Nicaragua from 1912 to 1933, except for a nine month period beginning in 1925. From 1910 to 1926, the conservative party ruled Nicaragua. The Chamorro family, which had long dominated the party, effectively controlled the government during that period. In 1914, the Bryan-Chamorro Treaty was signed, giving the U.S. control over the proposed canal, as well as leases for potential canal defenses.

The possibility of building a canal across the isthmus of Central America had been the topic of serious discussion since the 1820s, and Nicaragua was long a favored location. When the United States shifted its interests to Panama, Zelaya negotiated with Germany and Japan in an unsuccessful effort to have a canal constructed in his state.

The concept of a canal near Panama dates back to the early 16th century, the first attempt to construct a canal began in 1880 under French leadership. After this attempt failed and saw 21,900 workers die, the project of building a canal was attempted and completed by the United States in the early 1900s, with the canal opening in 1914.

The building of the 77 km (48 mi) canal was plagued by problems, including disease (particularly malaria and yellow fever) and landslides. By the time the canal was completed, a total of 27,500 workmen are estimated to have died in the French and American efforts.

As of 2004, the Nicaraguan government is again proposing a canal through the country– large enough to handle post-Panamax ships of up to 250,000 tons, as compared to the 65,000 tons or so that the Panama Canal can manage.

The estimated cost of this scheme may be as much as 25 billion US dollars; this is 25 times Nicaragua’s annual budget. Ex-President Enrique Bolaños has sought foreign investors to support the project. The scheme has met with strong opposition from environmentalists, who protest the damage that would be done to the rivers and jungle.

Tags: On this day