Italian philosopher Giordano Bruno, best-known as a proponent of heliocentrism and the infinity of the universe, was burned at the stake as a heretic by the Roman Inquisition. 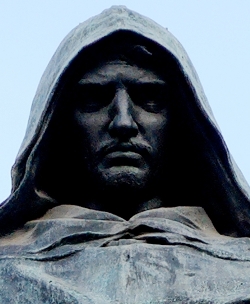 In addition to his cosmological writings, he also wrote extensive works on the art of memory, a loosely-organized group of mnemonic techniques and principles.

He is often considered an early martyr for modern scientific ideas, in part because he was burned at the stake as a heretic by the Roman Inquisition.

Bruno was deeply influenced by magical views of the universe inherited from Arab astrological magic, Neoplatonism and Renaissance Hermeticism.

Other recent studies of Bruno have focused on his qualitative approach to mathematics and his application of the spatial paradigms of geometry to language.

His trial was overseen by the inquisitor Cardinal Bellarmine, who demanded a full recantation, which Bruno eventually refused. Instead he appealed in vain to Pope Clement VIII, hoping to save his life through a partial recantation. The Pope expressed himself in favor of a guilty verdict. Consequently, Bruno was declared a heretic, and told he would be handed over to secular authorities. According to the correspondence of one Gaspar Schopp of Breslau, he is said to have made a threatening gesture towards his judges and to have replied:

All Bruno’s works were placed on the Index Librorum Prohibitorum in 1603.

On the 400th anniversary of Bruno’s death, Cardinal Angelo Sodano declared Bruno’s death to be a “sad episode”. However he added that people should not judge those who condemned Bruno and maintained, despite the historical facts, that the inquisitors “had the desire to preserve freedom and promote the common good and did everything possible to save his life.”

Tags: Assassination, On this day