U.S. President Barack Obama and Russian President Dmitri Medvedev have signed a treaty to reduce their countries’ nuclear stockpiles by 25 to 30 percent over seven years. 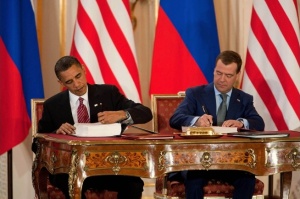 In the Spanish Hall, an ornate chamber within the Czech capital’s Prague Castle, the two countries, which own more than 90 percent of the world’s nuclear weapons, agreed to downsize their arsenals.

Presidents Obama and Medvedev sat in front of U.S. and Russian flags and signed their countries’ first major nuclear arms reduction accord in almost two decades.

The new ten-year pact, which is called the “New START Treaty”, requires the U.S. and Russia to cut their inventory of nuclear warheads to about 1,500 each in the next seven years. Both countries are estimated to have well over 2,000 warheads now.

The agreement also slashes by more than half the number of missiles, submarines and bombers that carry the weapons.

The pact replaces the 1991 Strategic Arms Reduction Treaty (START I), which was signed by U.S. President George H.W. Bush and Soviet President Mikhail Gorbachev in the final days of the Soviet Union. START I expired in December of last year. The treaty complements the other two nuclear arms reduction treaties signed by the United States and Russia, which where the 1993 Russia, which where the 1993 START II treaty and the 2002 Moscow Treaty also known as SORT.

Obama said the treaty is a big step forward for world security. “Today is an important milestone for nuclear security and nonproliferation and for U.S.-Russia relations,” he said.

Medvedev said because of this treaty, the entire world community has won. The Russian leader said the year-long negotiations were tough, but hard work on both sides brought success.

“That enabled us to do something that just a couple of months ago looked like ‘mission impossible.’ Within a short span of time we prepared a full-fledged treaty and signed it,” he said.

Obama says, in addition, that the treaty paves the way for future arms reduction talks with Russia, mainly on short-range nuclear weapons. “This treaty will set the stage for further cuts, and going forward, we hope to pursue further discussions with Russia on reducing both our strategic and tactical weapons, including non-deployed weapons,” he said.

Tom Collina, research director at the Arms Control Association, says the new treaty is significant in reducing the threat from U.S. and Russian nuclear weapons, but more significant because it could lead to further cuts.

“We think we can even go to deeper reductions, and we hope they sign a new treaty after this one relatively soon. But this treaty is a great step forward, it is very important, and it puts U.S. and Russian arms control back on a firm footing, and, again, sets us up for deeper cuts,” he said.

The signing of the “New START” treaty is one of several arms control developments taking place in several weeks.

Earlier in the week, President Obama announced a major shift in U.S. nuclear policy. He said for the first time that preventing nuclear proliferation and nuclear terrorism is at the top of the U.S. nuclear agenda. The threat of destruction by Russian warheads is now considered a secondary menace.

Under Obama’s nuclear posture review, the U.S. pledges not to use nuclear weapons on non-nuclear countries that abide by their nonproliferation obligations.

Obama also plans to hold a conference on nuclear security next week in Washington, D.C..

In their hour-and-a-half meeting before the ceremony, President Obama urged Medvedev to support new U.N. sanctions against Iran for its refusal to stop enriching uranium. The Russian leader said the issue is not whether to impose sanctions, but what kind of sanctions.

“Smart sanctions should be able to motivate certain parties to behave properly, and I am confident that our teams that will be engaged in consultations will continue discussing this issue,” he said.

Obama said, “We are working together at the United Nations Security Council to pass strong sanctions on Iran and we will not tolerate actions that flout the NPT (Nuclear Non-Proliferation Treaty).” He added, “My expectation is that we are going to be able to secure strong, tough sanctions on Iran this spring.”

The nuclear treaty is almost certain to be approved in the Russian Duma. However, Russian Foreign Minister Sergei Lavrov has said Russia reserves the right to drop out of the pact if it believes U.S. missile defense plans for Europe threaten its security.

Many experts agree passage in the U.S. Senate is not as certain, but that its prospects are good. To ratify the treaty, it will require 67 votes, to pass it will require Republican votes. Republicans in the Senate have expressed concerns that too many restrictions have been placed on America’s nuclear arsenal.

However, Obama is confident the treaty will be ratified when asked during a press conference following the signing. Obama stated, “And so I’m actually quite confident that Democrats and Republicans in the United States Senate, having reviewed this, will see that the United States has preserved its core national security interests, that it is maintaining a safe and secure and effective nuclear deterrent, but that we are beginning to once again move forward, leaving the Cold War behind, to address new challenges in new ways.”

Obama also noted, “[T]hat both in Russia and the United States, it’s going to be posed on the Internet, appropriate to a 21st century treaty. And so people not only within government but also the general public will be able to review, in an open and transparent fashion, what it is that we’ve agreed to.” Copies of the treaty and it’s protocol have been posted on the State Department’s website.