Kurmanbek Bakiyev left Kyrgyzstan today for Kazakhstan after large scale protest in the country forced him to flee from the Kyrgyz capital to his home village of Teyit. 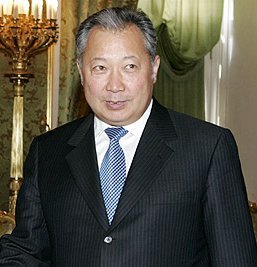 Kazhakstan’s secretary of state and Foreign Minister called this “an important step” to stabilize Kyrgyzstan, thereby preventing conflicts in the country.

The whereabouts of Bakiyev’s brothers, whom Roza Otunbayeva, the interim President of Kyrgyzstan had refused security was not clear.

The Interfax news agency of Russia mentioned witnesses claimed the deposed president had boarded the plane without his brother. Bakiyev’s son, Maksim, is already away from Kyrgyzstan. Details about Bakiyev’s departure and its planning was also not known.

Earlier today, gunshots were heard in south Kyrgyzstan during a political rally held by the deposed Kyrgyz President. This attack caused no injuries, but Bakiyev took a car to leave the rally after the shots were heard.

Bakiyev has been holding political meetings in towns near Teyit. Thursday’s rally was in Osh, the largest city in south Kyrgyzstan, where the former was addressing a crowd of 5,000 people. Bakiyev arrived in a convoy consisting of minivans at Osh, where another rally supporting the country’s interim government was being held.

Aziza Abdirasulova, a human rights activist, told The New York Times agency that when Bakiyev started addressing the crowd, supporters of the interim government came running at him. His bodyguards fired in the air and Bakiyev was assisted into a car and driven away from the city. She affirmed that no one was wounded. Eyewitnesses confirmed what Abdirasulova said, adding that the other political meeting was being held about 300 meters by members of the interim government. Two of Bakiyev’s brothers were in the convoy with him.

Bakiyev fled from the capital on April 7 after a violent riot where people attacked government building. At least 83 people died in this violence in the Kyrgyz capital. “He killed all those young people. All the people are against him. How can he even turn up here?” commented Alikh Mansurov, an unemployed dweller of Osh. While there is no arrest warrant against Bakiyev, his brother Zhanybek has one against him. The latter was once the head of the state guard service, and accompanied Bakiyev in the convoy.