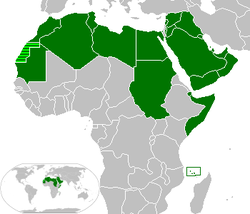 The Arab League currently has 22 members, Egypt’s membership was suspended in 1979 after it signed the Egyptian–Israeli Peace Treaty, and the League’s headquarters were moved from Cairo to Tunis.

In 1987, Arab countries restored diplomatic relations with Egypt and the country was readmitted to the league in 1989 while the league’s headquarters moved back to Cairo. In September 2006, Venezuela was accepted as an observer, and India in 2007. END_OF_DOCUMENT_TOKEN_TO_BE_REPLACED

200,000 people displaced by violence in Yemen

The United Nations High Commissioner for Refugees (UNHCR) has said that 200,000 people in Yemen have been displaced by ongoing violence, and that the growing number of refugees is straining the ability of aid agencies to shelter and care for those forced to flee their homes.

The refugee agency reports that thousands of civilians in north Yemen are fleeing to neighboring provinces in a desperate search for safety, shelter and assistance.

The current wave of fighting between the government and the al-Houthi rebel group is entering its sixth month. It added that it is fast running out of space and money to care for them.

“We now estimate that some 200,000 people have been displaced by the conflict in Yemen since 2004, including those displaced by the latest escalation which erupted in early August last year,” said UNHCR spokesman Andrej Mahecic. END_OF_DOCUMENT_TOKEN_TO_BE_REPLACED

Human rights groups have criticized U.S. President Barack Obama’s decision to halt the transfer of detainees to Yemen from the prison in Guantanamo Bay, Cuba.

Mr. Obama suspended the repatriation of Yemeni detainees Tuesday because of what he called an “unsettled” security situation in Yemen. “It was always our intent to transfer detainees to other countries only under conditions that provide assurances that our security is being protected,” Obama said.

Some lawmakers had expressed concern that freed inmates could join Yemen-based al-Qaida militants plotting attacks on the United States. The Times has also reported claims that former detainees have joined al-Qaida on returning to Yemen. END_OF_DOCUMENT_TOKEN_TO_BE_REPLACED

The United States and the United Kingdom closed their embassies in Yemen Sunday, pointing to ongoing terrorist threats. The closures come after the two nations pledged to boost counter-terrorism support to the Yemeni government.

The American embassy’s website said the threats come from al-Qaeda in the Arabian Peninsula, the group linked to the failed Christmas Day airplane bombing attempt in the United States.

The message in part said, “The U.S. Embassy in Sana’a is closed today, January 3, 2010, in response to ongoing threats by Al-Qaeda in the Arabian Peninsula (AQAP) to attack American interests in Yemen.” END_OF_DOCUMENT_TOKEN_TO_BE_REPLACED

The United Nations High Commissioner for Refugees (UNHCR) says the situation in the Saada province remains particularly tense as more people arrive there.

The U.N. refugee agency reports clashes have broken out in a number of districts in the Saada province as more people arrive. It says the situation in the Razeh district is particularly serious. END_OF_DOCUMENT_TOKEN_TO_BE_REPLACED

Two suicide bombers attacked the destroyer USS Cole while it was at anchor in Aden, Yemen, killing 17 of its crew members and injuring 39 others.

On 12 October 2000, USS Cole, under the command of Commander Kirk Lippold, set in to Aden harbor for a routine fuel stop. Cole completed mooring at 09:30.

Refueling started at 10:30. Around 11:18 local time (08:18 UTC), a small craft approached the port side of the destroyer, and an explosion occurred, putting a 40-by-60-foot gash in the ship’s port side according to the memorial plate to those who lost their lives.

According to former CIA intelligence officer Robert Finke, the blast appeared to be caused by explosives molded into a shaped charge against the hull of the boat. END_OF_DOCUMENT_TOKEN_TO_BE_REPLACED

Yemeni media have said that clashes between local fighters and government forces in the southern part of the country have killed at least 29 Shi’ite rebels.

Military sources said that the army opened fire at the rebels in Harf Sufyan. Officials have said that some rebel leaders, among them Abdullah Ali al-Qallat, were among those killed.