As part of the Pan-Slavism movement, the Prague Slavic Congress began in Prague, one of the few times that voices from all Slav populations of Europe were heard in one place.

The Slavic Peoples are an ethnic and linguistic branch of Indo-European peoples, living mainly in eastern and central Europe.

From the early 6th century they spread from their original homeland (most commonly thought to be in Eastern Europe) to inhabit most of eastern Central Europe, Eastern Europe and the Balkans.

Many settled later in Siberia and Central Asia or emigrated to other parts of the world. Over half of Europe is, territorially speaking, inhabited by Slavic-speaking communities. END_OF_DOCUMENT_TOKEN_TO_BE_REPLACED

The Social Democratic Party wins a plurality in a legislative election in the Czech Republic, but its leader Jiří Paroubek resigns citing a poorer-than-expected result.

The election saw a loss of support for the Social Democratic Party (ČSSD), although they still received the highest number of votes. The conservative Civic Democratic Party (ODS) and TOP 09 followed in second and third, while the Communist Party finished fourth.

The Summit is the largest gathering of heads of state called by a United States president since the 1945 United Nations Conference on International Organization. Delegations from forty-six governments plus the United States are attending, thirty-eight of which are represented by heads of state or government. END_OF_DOCUMENT_TOKEN_TO_BE_REPLACED

Radium E becomes the first radioactive element to be made synthetically.

Radium (Latin radius, ray) was discovered by Marie Skłodowska-Curie and her husband Pierre in 1898 in pitchblende from North Bohemia, in the Czech Republic (area around Jáchymov).

While studying pitchblende the Curies removed uranium from it and found that the remaining material was still radioactive.

They then separated out a radioactive mixture consisting mostly of barium which gave a brilliant green flame color and crimson carmine spectral lines which had never been documented before. The Curies announced their discovery to the French Academy of Sciences on 26 December 1898. END_OF_DOCUMENT_TOKEN_TO_BE_REPLACED

The Prager Oberamtszeitung reported, “Connoisseurs and musicians say that Prague has never heard the like,” and “the opera … is extremely difficult to perform.” Provincialnachrichten of Vienna reported, “Herr Mozart conducted in person and welcomed joyously and jubilantly by the numerous gathering.”

Da Ponte’s claim in his Memoirs that the libretto was finished in June 1787 is untrustworthy. The score was completed on October 28 of the same year after Da Ponte was recalled to Vienna to work on another opera.

United States Ku Klux Klan figure and Republican Party politician David Duke of Louisiana was arrested and later released, on the condition that he leave the country, by Czech Republic officials in the Czech capital of Prague over the weekend.

The reason given was that Duke holds that the Holocaust never occurred, which is illegal in several countries, including the Czech Republic.

Duke, age 59, was hosted in Prague by Filip Vávra to promote his book My Awakening, and had been scheduled to give a lecture at Charles University, which the University had cancelled prior to his arrest.

On Monday, Europe’s largest airline, Air France-KLM, stated that it is interested in buying a large part of Czech Airlines (CSA).

Last month, the Czech government announced that it is planning to sell its 91.51% stake in Czech Airlines, expecting to generate about US$270 million.

The Soviet Union and its Warsaw Pact allies invaded the Czechoslovak Socialist Republic, after failed negotiations, in order to prevent Alexander Dubček’s Prague Spring reforms from continuing. In the operation, codenamed “Danube”, the Soviets sent thousands of troops from several Warsaw pact countries; 72 Czechoslovaks were killed by Soviet tanks. 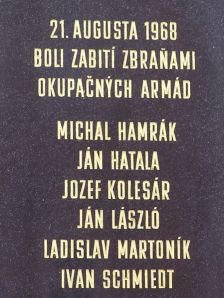 The memorial plate in Košice Slovakia

The invasion was successful in stopping the partial democratization reforms and strengthening the authority of the Communist Party of Czechoslovakia. The foreign policy of the Soviet Union during this era would be known as the Brezhnev Doctrine.

Dubček was appointed as leader of the Communist Party of Czechoslovakia (KSČ) after the resignation of Antonín Novotný. Dubček’s reforms consisted of his Action Programme which would guarantee additional rights to the citizens. The Soviets attempted to limit the changes made in Czechoslovakia by negotiating with them; this failed and the invasion was implemented. After the Bratislava Declaration, Soviet troops moved out of Prague and other cities, but remained along Czechoslovak borders.