According to revised official figures, the economy of the eurozone, the sixteen European countries using the euro, did not grow at all in the final quarter of last year. Eurostat reports that the number was revised from an initial figure of +0.1%.

Meanwhile, the eurozone’s lost more than 2.2% in a year-on year comparison, more than the initial estimate of 2.1%.

According to the numbers, Ireland saw an output drop of 2.3% in the last quarter of 2009, while Greece, the country in the eurozone with the most debt, had its economy contract by 0.8%. Italy was down by 0.3%, Germany saw no gain, but France posted a 0.6% quarterly growth.

The Associated Press reports the stagnation was unexpected by analysts, and will only reinforce expectations that the European Central Bank will keep the key interest rate at one percent for most of 2010.

Alexander Dubček came to power in Czechoslovakia, beginning a period of political liberalization known as the Prague Spring that still enabled the Communist Party to maintain real power. 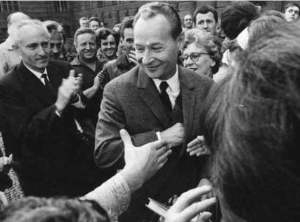 The Prague Spring (Czech: Pražské jaro, Slovak: Pražská jar) was a period of political liberalization in Czechoslovakia during the era of its domination by the Soviet Union after World War II.

It began on January 5, 1968, when reformist Slovak Alexander Dubček came to power, and continued until August 21, when the Soviet Union and members of its Warsaw Pact allies invaded the country to halt the reforms. END_OF_DOCUMENT_TOKEN_TO_BE_REPLACED

The European country of Slovakia will have the euro replace the koruna as its official currency, starting today Janary 1, 2009.

Slovakia is the sixteenth country to start using the euro. The official conversion rate is set at 30.126 koruna to one euro.

Joaquín Almunia, the European Union Economic and Monetary Affairs Commissioner, stated that the conversion will be “a proud moment for the euro area […] the euro has become the symbol of EU identity and is protecting us against the tremendous external shocks that we have had to cope with since the summer of 2007.”

January 1 also marks the tenth anniversary of the euro being introduced as globally exchangeable currency.