President George W. Bush addresses the nation from the Oval Office to announce the beginning of Operation Iraqi Freedom. 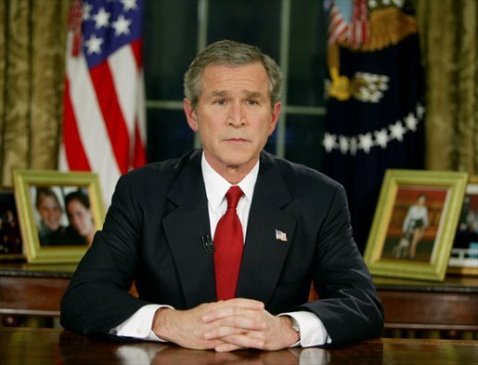 “The people of the United States and our friends and allies will not live at the mercy of an outlaw regime that threatens the peace with weapons of mass murder.”

The Senate committee found that many of the administration’s pre-war statements about Iraqi WMD were not supported by the underlying intelligence. 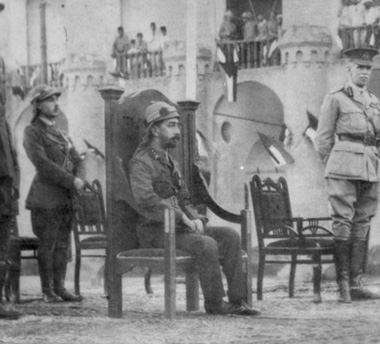 Faisal I as King of Iraq

The British install the son of Sharif Hussein bin Ali (leader of the Arab Revolt of 1916 against the Ottoman Empire) as King Faisal I of Iraq.

The British government, mandate holders in Iraq, were concerned at the unrest in the colony. They decided to step back from direct administration and create a monarchy to head Iraq while they maintained the mandate. Following a plebiscite showing 96% in favor, Faisal agreed to become king. In August 1921 he was made king of Iraq.

The image is a Photo Post_Card of the Coronation of Emir (Prince) Faisal I as King of Iraq on 23 of August 1921. Emir Faisal has already served as King of Syria from March to July. The event was conducted, a t six A.M., in the court-yard of the Ottoman built Serai, his temporary headquarters upon arriving in Baghdad.

On the extreme Lt is Sir Percy Cox, the British High-Commisioner, and to his Lt. is Kinahan Cornwallis, King Faisal is seated, and to his Lt. is Sir Aylmer Haldane, the British Commandig Officer. Behind the King is his ADC Tahsin Qadri and to extreme Lt. is Sayied Hussein Afnan, Secretary of the Council of Ministers. Sir Percy Cox proclaimed that 99% of the Iraqis have voted for the new King’s accession to the throne.

The dispatching of Iraqi army units to Jordan played into the hands of two of the key members of the Iraqi Free Officers movement: Colonel Abdul Salam Arif and the movement’s leader, Brigadier General Abdul Karim Qasim.

The Iraqi 19th and 20th Brigades (the former under the command of Qasim and the latter featuring Arif’s battalion) were dispatched to march to Jordan, along a route that passed Baghdad. The opportunity for a coup was thus presented to, and seized upon, by the conspirators. END_OF_DOCUMENT_TOKEN_TO_BE_REPLACED

Iraqi Airways have announced that they are to drop all flights to the United Kingdom and Sweden. The announcement comes after a row with Kuwait over war reparations. 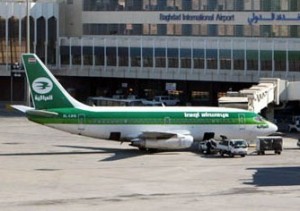 Iraq and Kuwait are in dispute over billions of dollars of reparations; this includes around $1.2bn in aircraft and parts seized beginning in 1990 by Saddam Hussein.

The airline’s director general was stranded in the United Kingdom on the basis of a High Court court order obtained by Kuwait Airways last month, but his passport was returned and he was allowed to leave after he informed the court of all the airline’s assets in the UK.

Amer Abdul-Jabbar, the Iraqi Transport Minister released a statement saying that “We will announce whether or not we will dissolve the company.” The cancellations were announced by the director general of Iraqi Airways, Kifah Jabar Hassan. END_OF_DOCUMENT_TOKEN_TO_BE_REPLACED

Over 100 killed in Iraq’s coordinaded attacks

Several attacks in three different parts of Iraq today killed over 100 people and injured almost 350 more, making Monday the deadliest day in the country this year. 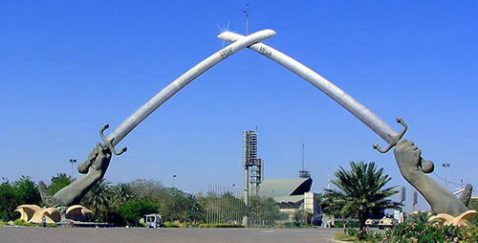 Hands of Victory in Baghdad

Early on Monday morning, attacks with automatic weapons against six army and police checkpoints in the city of Baghdad killed seven police officers, with three other bombings in the city killing another two policemen.

An official from Iraq’s interior ministry said that the attacks in Baghdad began at around 0630 local time (0330 UTC), not ending until around 0800 local time (0500 UTC). The official also said that most of those wounded were security personnel.

At around 1330 local time (1030 UTC), three car bombs exploded in the city of Al Hillah outside a textiles factory; the bombings came as workers were leaving the factory, which increased the death toll. END_OF_DOCUMENT_TOKEN_TO_BE_REPLACED

The Iraqi election commission has started to manually recount about 2.5 million ballots cast in the capital Baghdad during parliamentary elections two months ago.

Counting could take from two to three weeks, according to officials. An official for the Independent High Electroral Commission, Qassim al-Abbudi, said that “[w]e will count 600 boxes today”.

The recount was requested by incumbent Iraqi prime minister Nouri al-Maliki, who is accusing the opposition of fraud, when provisional results gave the bloc led by rival Iyad Allawi a two-seat lead. al-Maliki’s election coalition, however, now says the recount should be stopped, saying the election commission isn’t using the correct procedures and will have an incorrect result.

The Iraqi parliamentary poll, held on March 7, resulted in the Iraqiya bloc receiving 91 seats, while the incumbent PM’s State of Law coalition taking 89 seats; in order to form a government, a block must obtain 163 parliament seats.

The New Yorker magazine posted an article and supporting pictures online, postdated May 10, detailing accounts of torture and abuse by American personnel of prisoners held at the Abu Ghraib prison in Baghdad, Iraq.

Beginning in 2004, accounts of physical, psychological, and sexual abuse, including torture, sodomy and homicide of prisoners held in the Abu Ghraib prison in Iraq (also known as Baghdad Correctional Facility) came to public attention.

These acts were committed by personnel of the 372nd Military Police Company of the United States Army together with additional US governmental agencies.

As revealed by the 2004 Taguba Report, a criminal investigation by the United States Army Criminal Investigation Command had already been underway since 2003 where many soldiers of the 320th Military Police Battalion had been charged under the Uniform Code of Military Justice with prisoner abuse. END_OF_DOCUMENT_TOKEN_TO_BE_REPLACED